Technical Journal for everything I do in TP2 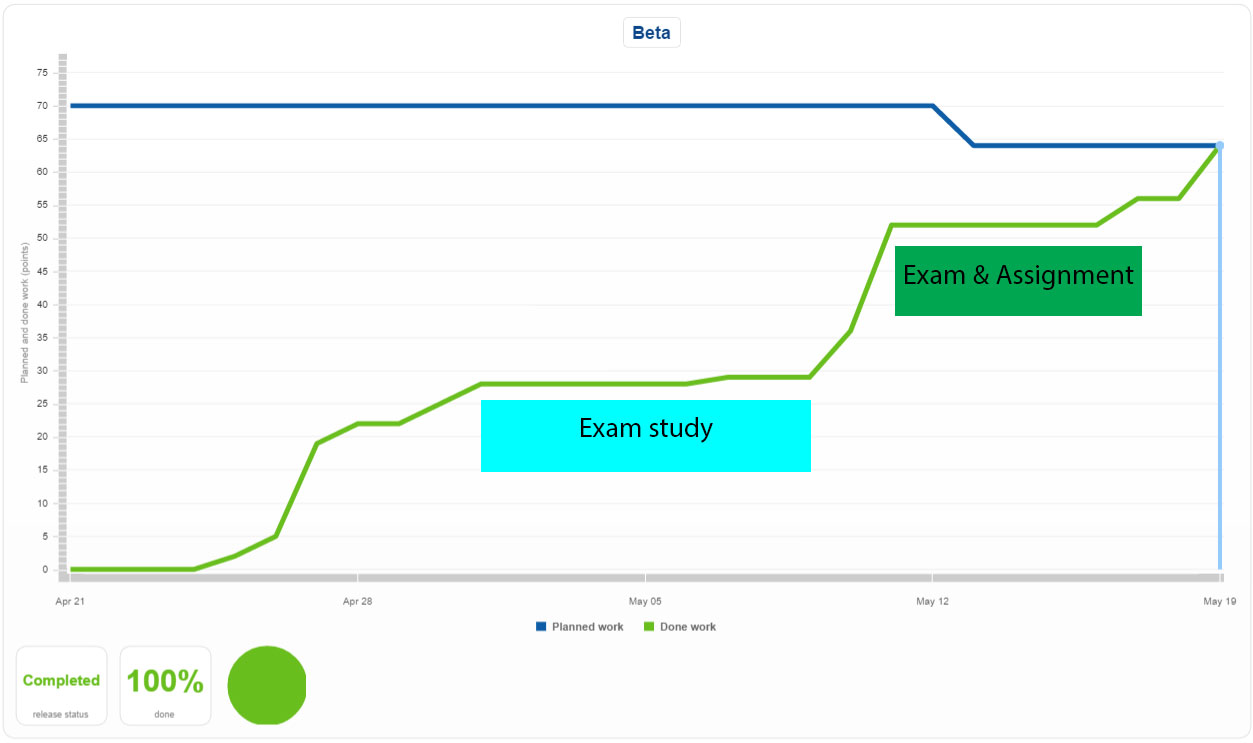 So we overestimated our ability to manage our time slightly this sprint. A lot of this comes down to overestimating how much we would get done in the early part of the release, where we aimed to have most of the work done. Exams obviously took precedence for a large chunk of the release time, so we worked around these how we could. Unfortunately we had came to a point where we knew not all of the work would be done, and a lot of this was due to Mark being out of commission with his illness, so we took off what we knew wouldn't be done from the release, and continued to work. We were a day late on finishing our final sprint, which I take full responsibility for. This was purely down to laziness on my part, I've been relaxing a little too much this past week to try and recuperate for the presentation. I think overall though, given the circumstances, this release could have went much worse. I think it is bad we aimed too high, but it's still better than aiming too low and playing it safe in my opinion. We still reached our revised goal and I'm impressed considering the time constraints we had. On a more generally conclusive note, I've really enjoyed my role as scrum master, due largely to the fact that I have had one of the easiest teams in the world to manage.

I set up the analytics trigger points in the game, effectively implementing the analytics system Shane had added to gather some sample data to demonstrate for beta. This was in sprint 12. In sprint 14 (the last one), myself and Brian visualised some of the data gathered from these trigger points to show them in action. Things like crash points and lines taken around corners for example.

Time mostly. We overestimated how much we had and how much we would get done, so the sprints and overall release didn't go as smoothly as we would like, but again, given the circumstances, I think we did fairly well. This was our rockiest release yet we still delivered on the vast majority of what we said we would, and the things that did not get completed were non-essential things that would be done in the future if work were to continue.

As a final conclusion, I'd just like to say it's been a pleasure. I've enjoyed this semester immensely, I've learned a lot, I feel as though I have grown as a person, and I have most definitely made some friends for life through our shared anguish. My team has been exceptional, their productivity has been infectious, and I am certain I will miss working with them.

We set up the release on scrum this week. This release was a fairly easy one to plan. We sat down and discussed what we absolutely had to do for beta, along with considering what else we could do feasibly. User testing was priority number 1 from the get go. Last week we tried to do all of the user testing before the release so we could make changes based on it, but essentially it became the sprint where we get a handle on user testing. We did the document and pilot testing last week, so for the release we now have a good system for how to do the user testing properly. After planning out exactly what tasks the user testing was made up of, we looked at each individual area of the game to see what else had to be done. So for example more work on dirtying up the track, as well as texturing the bike and hands. We planned the release to be done a day before the official upload, which is on the 19/5. We're fairly confident it will be done well before that, but we always try to plan for the worst case scenario, so we did this just in case we don't get the work all done well before then.

The tasks I took on this week were based on some of the feedback from the pilot testing which was done with the gamers. So it was suggested to add face button key bindings for the controls because some people prefer them to the trigger buttons. Other feedback was that the reverse isn't strong enough, so I upped the force on this. Finally, it was found that the users were restarting the level often, so I added a button dedicated to this instead of having to pause the game and then select the option. These tasks took less time than I estimated them to. I estimated them to take an hour each but it was less than an hour for all 3. I did this on the off chance of there being bugs encountered, but I've learned for next time that small tasks like these are generally safe to estimate more harshly.

No major issues. Set up the release without any hassle.

The sprint didn't really go as smoothly as we would have liked this week. Essentially another subject that the team was working on together took up a lot more time and effort than we had expected it to, and as a result we didn't really have much time for team project until very late into the sprint. The burndown is very cliff dive like as a result, and some work that we were able to put off until release we did. The key work this week was the user testing and its document, which we got done.

For the user testing document, I helped Ronan with the script structure and content. There were no real problems here.

Main issue was time, which we just didn't have enough of.

This week the team was very busy with other areas of the course. We decided it would be best for us all not to do a sprint, since we were simply too busy with other more urgent matters.

We got our results back for the Alpha presentation. I think we're all really happy with how we did, and are proud to have done so well. Some of the feedback we got was to improve the sound and visuals some more, but mainly to focus on user testing. This is something we will have to do completely next week if we're to have a release.

Although we were not on a sprint, we got to doing some initial work on the user testing document. We also planned out the backlog for release some more, though we were told not to try and do much more to the game which I think is good advice, since we have so many other assignments to work on.

No issues this week bar the fact that we were too busy with other modules to really do much for the team project.

We had the sprint officially finished last week, but there were some things that were still worked on afterwards, which is perhaps bad scrumming but they were such minor and obvious changes that I didn't feel like a sprint was necessary. Most of the work this week was either preparing the material for upload or preparing for the presentation.

I'd done the presentation material last week, so preparing was simply a matter of looking at the slides and going through them.

On the upload day I helped with gathering some of the necessary upload material.

There was a bug with the printing of the split times that we only noticed before the presentation that I helped fix.

Finally we started filling out the backlog this week. The one thing I'm not sure of is how we are supposed to deal with user testing based tasks. I've contacted Gerry about this and it is something we are still in the process of ironing out. Further more, we are very busy this week and have decided to not do a sprint. Hopefully by next week the user testing scrum stuff will be sorted, and between now and then we can set up the rest of the backlog and start our Beta release.

So firstly, we got very good feedback. One of the biggest criticisms we got was on the bike bell sound slightly breaking immersion when you get the next split time, which says a lot about how well we did. I was surprised to hear we were the only team to switch to hours for estimations, because we think it makes way more sense. The key points to take away from the feedback was to get working on user testing and feedback. I'm glad we did well again, because we worked hard this release.

No real issues this week other than the bug fix which we sorted.